Welcome to the website of Wolkowski Funeral Service Ltd. 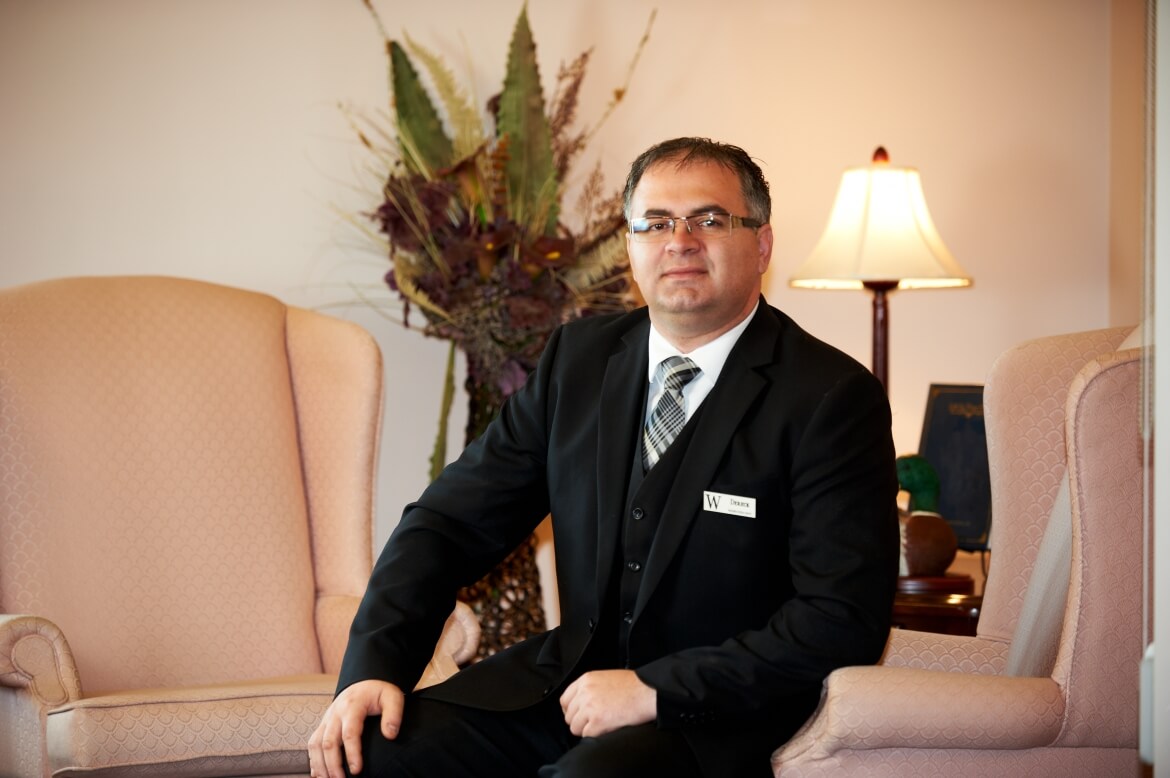 Wolkowski Funeral Service is proud to be locally owned and operated by Dereck L. Wolkowski.

Born and raised on the family farm, just West of Canora, Sk. Dereck graduated from the Canora Composite School. Finding a passion for funeral service early in life, he graduated from the Saskatchewan Funeral Service Association education program in 1998 while he worked for a funeral home in Kamsack.

When the funeral home was sold to a corporation, Dereck took over as manager. During that time, he was awarded a prestigious award by the corporation. He was awarded the President’s Award for exceeding families expectations and community involvement. In 2010, Dereck ventured out and opened his own funeral home in Kamsack. Making it Kamsack’s only locally owned funeral home.

Wolkowski Funeral Service welcomed Robyn Tataryn to the staff, In June 2011. Robyn is a former Kamsack resident with family roots near Wroxton, Sk. She graduated from Mount Royal College in 2000 with a Certificate in Funeral Directing/Embalmer. She completed her apprenticeship at Acadia Drive Funeral Chapel, Saskatoon, SK. She then moved to Red Deer, AB and began working at Red Deer Funeral Home and later McIniss and Holloway Funeral Chapels in Calgary, AB.

Wolkowski Funeral Service is proud to be serving the people of East–Central Saskatchewan, offering professional, and affordable services no matter your financial situation.

A year of daily grief support

Our support in your time of need does not end after the funeral services.  Enter your email below to receive a grief support message from us each day for a year.  You can unsubscribe at any time.

What Our Families are Saying TESTIMONIALS

Robyn and Dereck, you provide a great service and I want people to know that
with this posting (a long time coming). With the passing of my son Derek, just over 3 years ago, you were there in every way to handle all our concerns for all the arrangements and for planning a tribute to Derek. The afternoon of Derek’s death, I phoned you and Robyn, to hear your warm and friendly voice on the phone, was so great. I felt the welcome of having lived in the small town of Kamsack. You and Dereck came to Yorkton that very evening to pick up Derek. You really helped Amber and me with such a traumatic time. Then two days later, Ben, Amber and I met with you Robyn and you immediately put us at ease and assisted us with all the decisions that had to be made with our devastating loss. I was so relieved that you just looked after everything.
The tribute/service for Derek was hugely attended and you both handled every detail with care, warmth, concern and professionalism. There had even been a problem at the OCC with a water leak but you dealt with it and didn’t miss a step and there was no inconvenience.
Years prior, Dereck had looked after Darryl’s service and I was very impressed with how smoothly everything was handled. That is the reason I didn’t hesitate to contact you when Derek passed away.
Robyn, you were always readily available and it was so appreciated. I know this is your job, but you and Dereck really add the personal, caring touch to the whole emotional process and it really shows. Thank you again for your heartfelt caring and concern with Derek’s passing.

Directly order flowers, view and sign the condolences book, share memories and more to celebrate lives of those dearly missed.

Helpful resources to guide you through the loss of a loved one.

Take a few moments to express your wishes now and help to ease the burden on your loved ones.

A collection of answers to questions that people often have when arranging for a funeral.

Photos of Our Funeral Homes

Photos of Our Funeral Homes